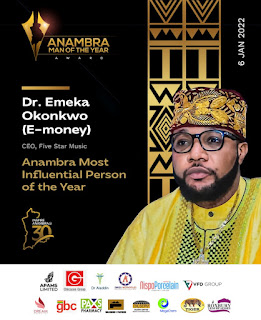 A renowned Nigerian businessman, Social media influencer and philanthropist, Dr. Emeka Okonkwo, popularly known as E-Money, has been voted the 2021 Anambra Most Influential person of the Year by Anambrarians both at home and in the Diaspora.

In a 10-days Leadership Excellence Award voting contest organized by Inspire Anambra@30 via online voting platforms, E-Money came top in a rigorous voting process that featured About Three other equally prominent and successful nominees on his category. He polled a total of 64% votes to defeat Nollywood Star, Yul Edochie 23%, celebrity music Star, Phyno 10%, and the CEO of Jezco oil and gas, Joseph Ezeokafor Jnr. (Jowizaza) 3% to clinch the position. 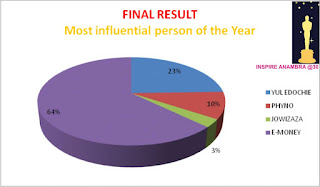 Emeka Okonkwo who hails from Uli, a community in Ihiala Local Government Area of Anambra is renowned for his philanthropy and humanitarian services, as well as his heavy social media fan base of over 9.8M followers on Instagram.

In announcing him as the most influential person of the Year, the organizers of the prestigious Award event, Inspire Anambra@30, said he emerged the winner from a keenly contested voting process for being the most influential Anambrarian during the year under review. They equally stated that Dr. Emeka Okonkwo has proved supportive in promoting Anambra brand through his platforms.

The award honors outstanding individuals/brands/organizations of Anambra origin and the 2021 edition award presentation, the second in a row, is scheduled to hold on January 6th, 2022, in the capital City of Awka, Anambra State.

Mr. Emeka Okonkwo, popularly known as E-Money was Born on the 18th of February 1981 in Ajegunle, Lagos state, Nigeria. He is publicly referred to as E-Money, and the head of a shipping company called Emmy cargoes, Nig. Ltd.

The company was established in 1997 and was formerly called Borisa Nig. Ltd.

Just like other billionaires, he is not just into Music production alone, but also into Real estate as well as oil and gas. Dr. Emeka Okonkwo is the younger brother of Kingsley Okonkwo, the famous Nigerian musician known as KCee.

Dr. Emeka Okonkwo popularly known as E-Money is Also the CEO of Five-star music, which produces artists like, Skibi, Harrysong, and his elder brother KCee.

Dr. Emeka Okonkwo is not just popular, but well-loved by so many Anambrarians and Nigerians at large. His lifestyle, giving millions to the poor for startups on social media has placed him among the top influencers in Nigeria and has always promoted the Anambra brand. Helping so many people on his over 9.8 million fan base Instagram account has made him, one of the most loved and popular influencers in Nigeria.

He is married and blessed with kids.